The interior of the Sardinian Tapas Bar Bisos located on the ground floor of a house from the turn of the 19th and the 20th century is furnished in a modest, monochromatic way using only several basic materials, ash wood, tannin acid treated steel and tradicional Sardinian fabric Orbace. Distinct effect is ensured by graphic design of the back wall.

The interior of the Sardinian Tapas Bar Bisos located on the ground floor of a house from the turn of the 19th and the 20th century is furnished in a modest, monochromatic way using only several basic materials and a bold graphic design covering the back wall.

The entrance area is mostly defined by a black steel wine rack, which also serves as a kind of dividing wall separating the reserved seating in the corner.

The furnishings of the main area are suited to its rather narrow arrangement and are distributed along the walls and windows. At one side there is a bar, surface of which is fitted with a specially made refrigerated case.  At the opposite side there is a long bench which runs just below the tall windows. The bench shows off the structure of the ash wood it’s made from; it is fitted with black steel legs. The same materials were used for the solid wooden tables with single steel legs.

The unusual colour of the dark steel panels covering the bar, which was achieved by a restoration technique using the action of tannic acid on corroded steel, contrasts nicely with the relatively light ash wood. The steel racks placed along the wall behind the bar and between the windows on the opposite side have the same finishing.

Chairs and bar stools from a Spanish producer meet the requirements for practicality and black & white colour combination.

The original lighting of the entrance was left intact. The main area is lit by the asymmetrical light Kao by Artemide which nicely illuminates the historic plasterwork.

The dominant feature of the interior is a large scale photograph of a mountain scenery with the Bisos logotype and the lyrics of one of the best-known Sardinian love songs “Non potho reposare”.

Another strong reference to Sardinia is the Orbace fabric which has been used for bench cushions, place mats and menu covers and also inspired the graphic design and the logo of the bar. Orbace is a woollen fabric with a distinctive black & white pattern, widely used by the Sardinian peasants in the past. 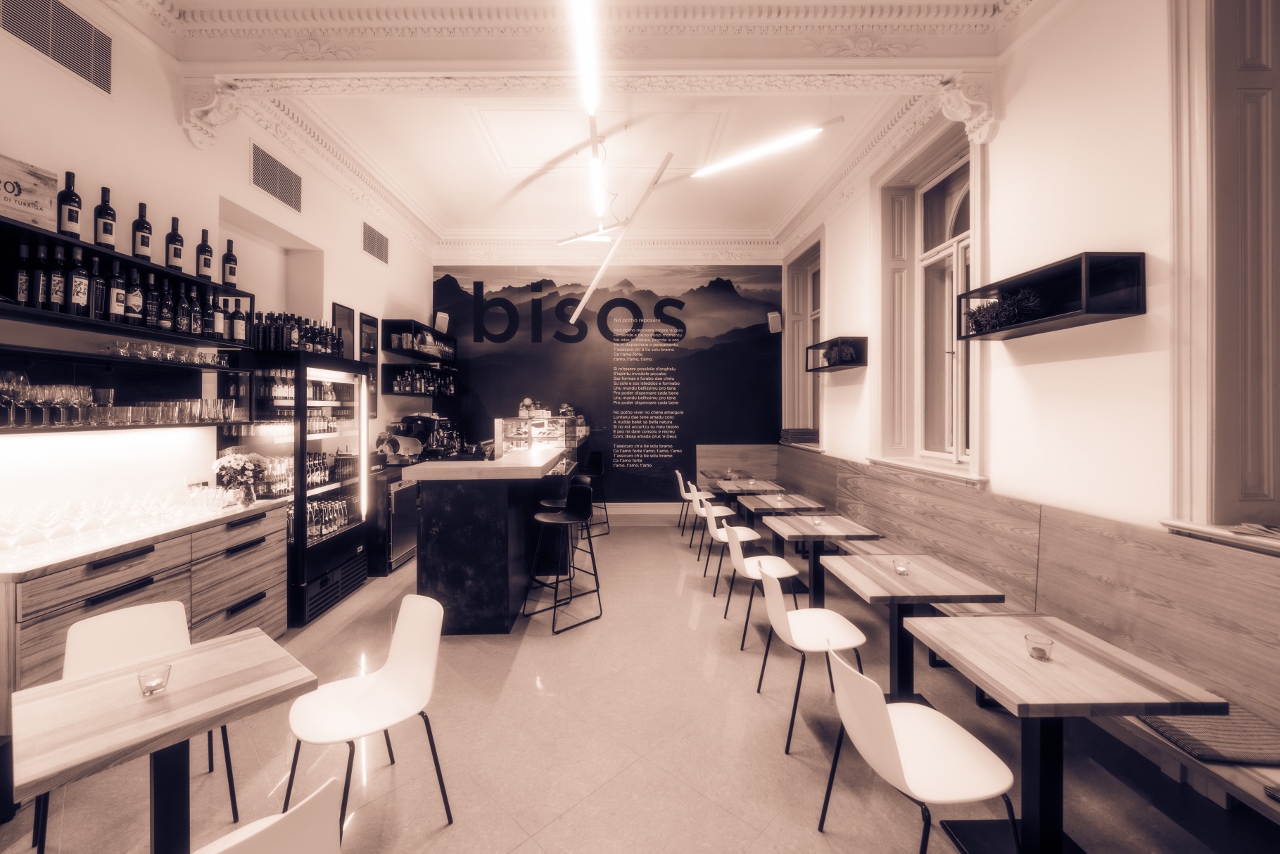 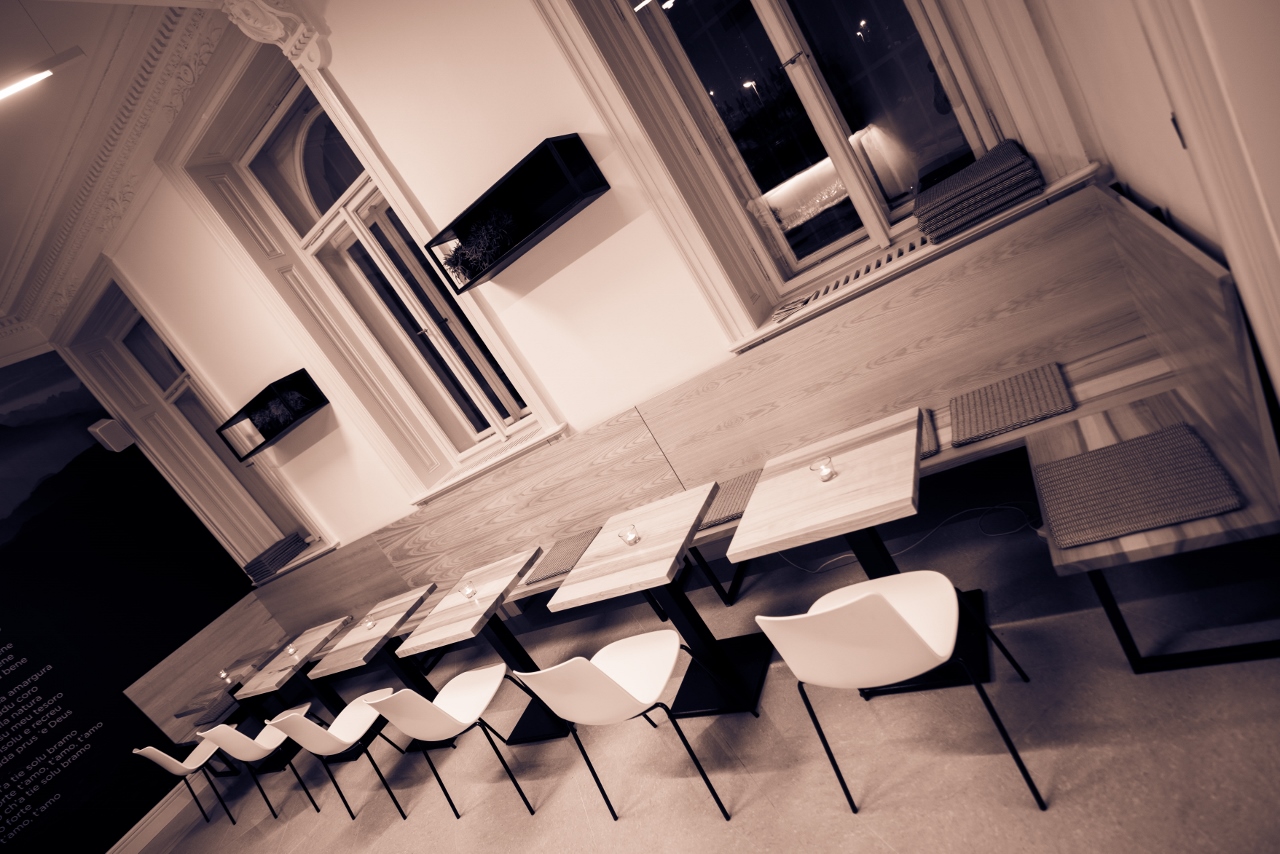 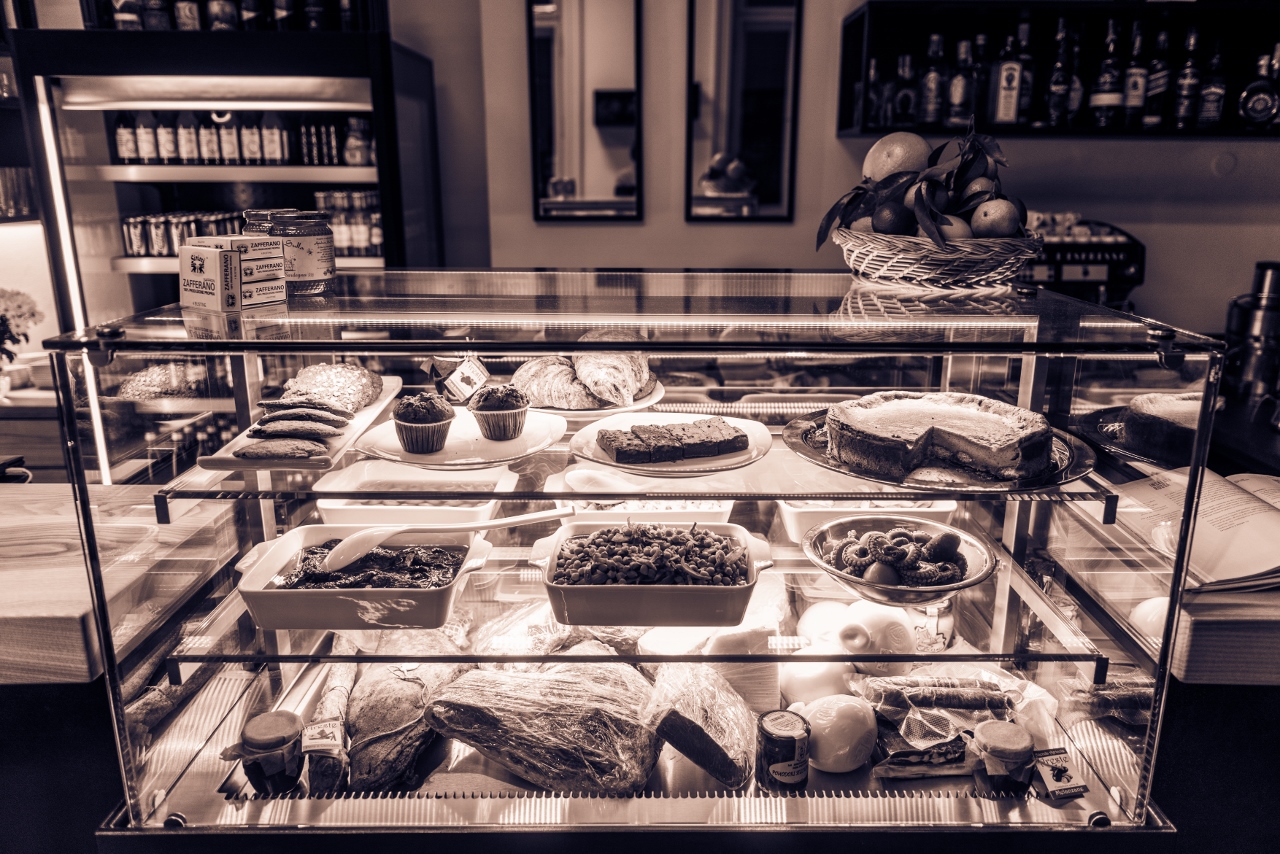 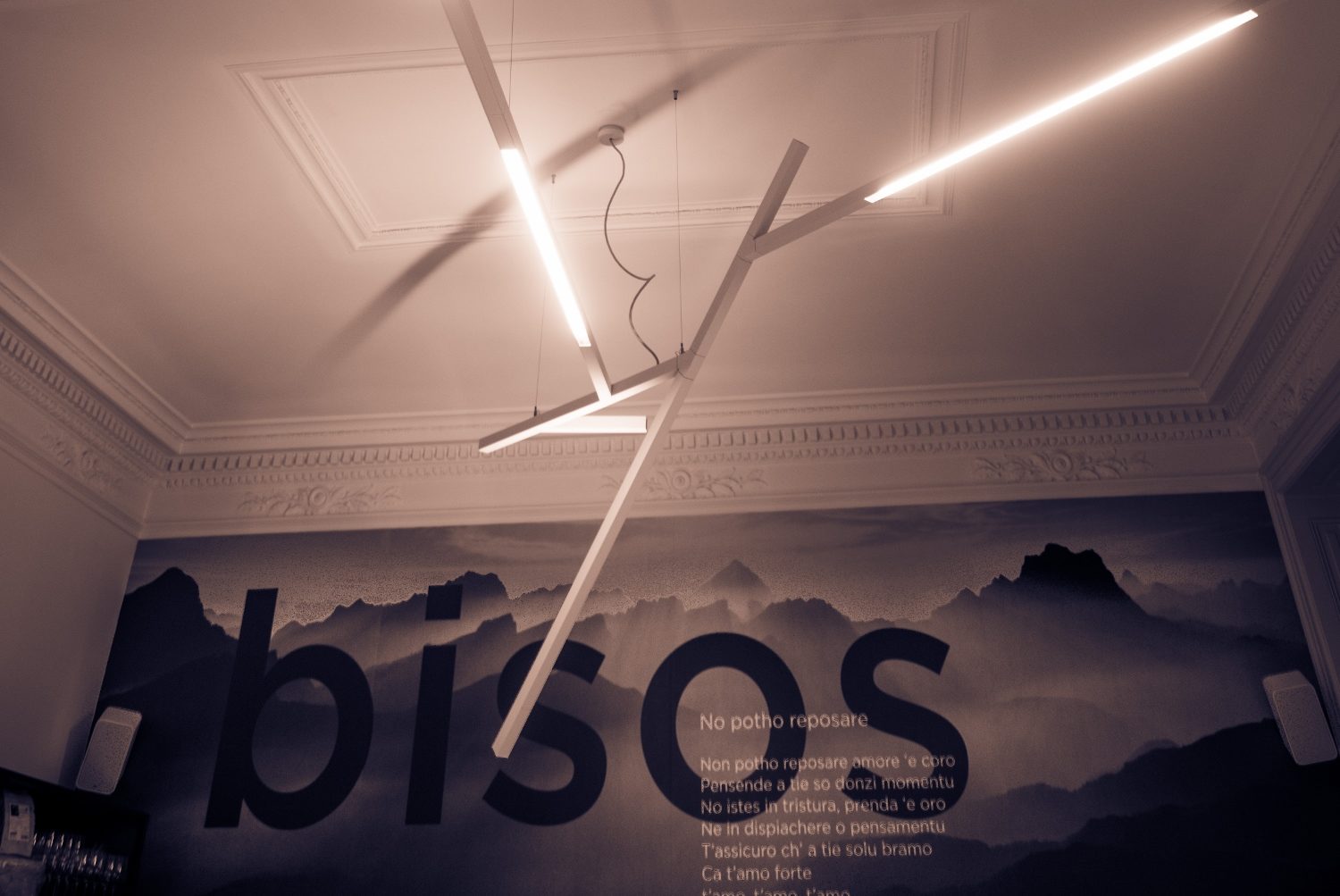 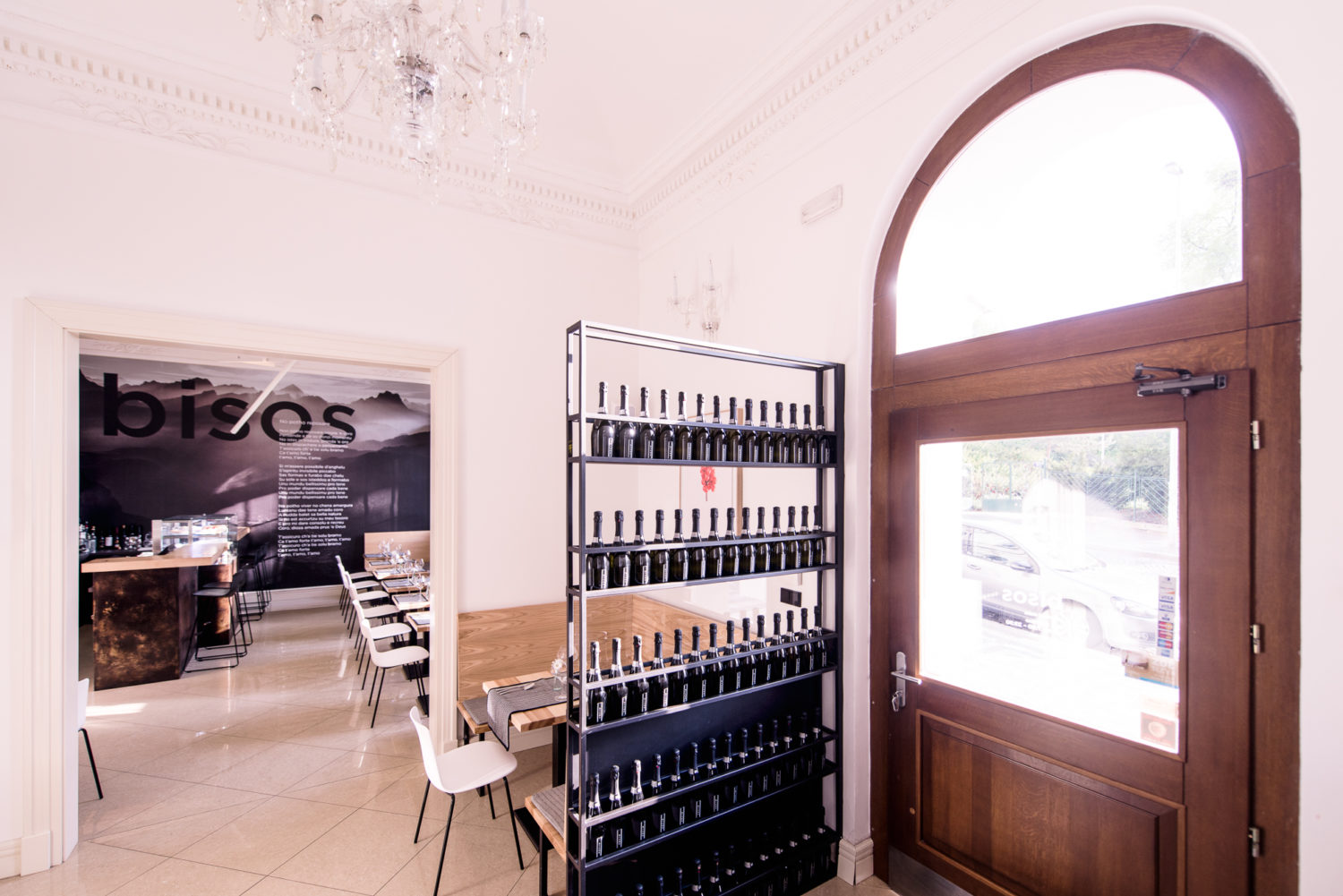 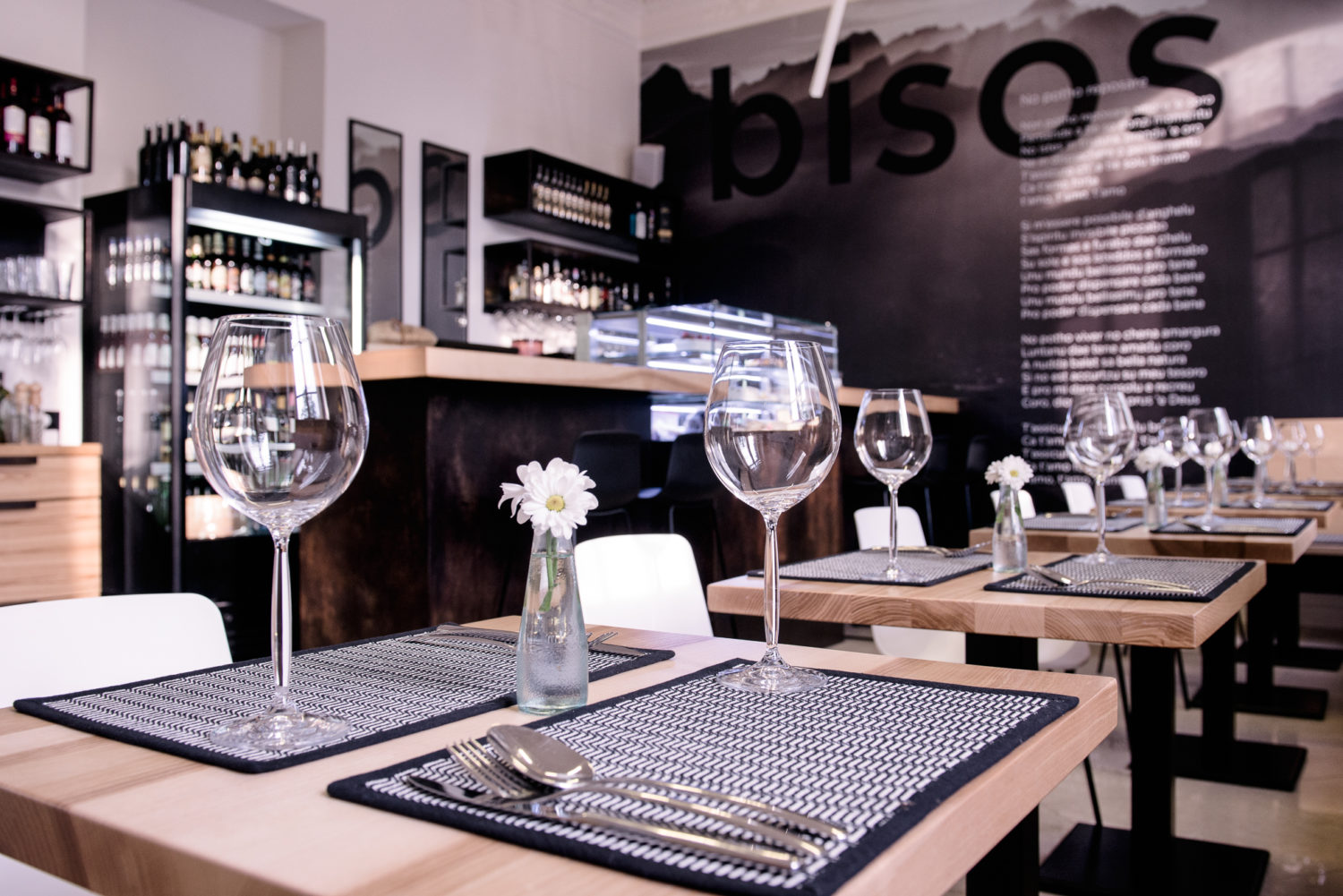